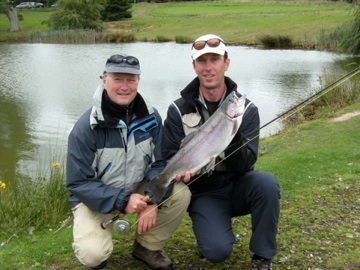 August was a mixed month in terms of both weather and fishing, with productive and quieter days on both river and lake. As I write day length is shortening fast, bringing with it the onset of Autumn and the promise of some truly dramatic fly fishing to come! Check out the juicy details for august along with early Autumn prospects in more detail below.

While August always provides a challenge to the stillwater trout angler, most clients saw some action. It has been fabulous watching anglers realize how making a few adjustments to their approach can make all the difference to their catches. The key during a very unsettled month weather wise has been to adapt to changing conditions, sometimes several times in one day. No one single feeding pattern emerged and small lures, nymphs and dry flies all accounted for numbers of fish as trout switched between abundant food sources. Floating line, sunk line and stalking tactics all accounted for some very fine fish, which included the month’s best fish of 10lb 1oz shown in the picture above. A damsel nymph did the damage at Loynton Trout Fisheries where the average fish size is running high for the time of year currently.

The first half of August provided some tough days as low flows saw very lethargic trout activity. This was not helped by mixed weather often resulting in poor evening action too. Fishing faster bubbly water and guiding flies right onto the trouts nose on slower glides, worked well. Terrestrial patterns scored regularly during windy conditions as masses of food rained down from the trees. Then certainly for the Wye, rain fell in sufficient quantity to just freshen the water slightly and it has been business as usual for the remainder of August.

The start of Autumn brings with it a turning of fortunes. Shorter day length gradually lowers water temperatures invigorating trout. In the lakes food availability starts to thin out slightly and we all start thinking of the fry feeding bonanza to come a little later on. For now lure, nymph and dries will all score and we expect some fabulous caddis and crane fly  hatches through September.

On the rivers it’s the last month for trout fishing and the time to target some large river residents as they feed heavily during the lead up to breeding later in the year. Dry fly will score right to the season’s end though when trout refuse to rise we have a awesome selection of nymphs to tempt that very special fish to take your fly.

For alternative species on fly September provides superb surface action for carp given some settled weather, while predator fishing just starts to get better and better with explosive surface fishing on the cards while water temperatures remain high.

We have 4 month of 2010 remaining now, fishing is only going to get better, with exciting visual sport, lots of action and big fish on the fin. Now is the time to book your autumn fly fishing adventure!