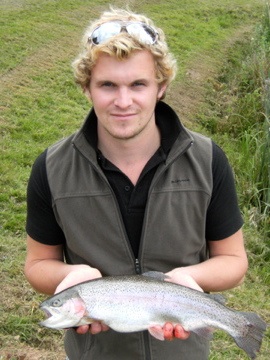 Flaming June provided further red hot fishing for MFF clients and a very busy month for both fly fishing lessons and guided fishing trips. Check out reports from lakes, rivers, plus prospects for July below.

Early June provided some great fun with mayflies which were subsequently overtaken by Damsel flies. Superb sport on both nymph and dry fly, with a number of 4lb plus trout taken on dries. 2 superb fish hit dries and kept on running, well into the backing, giving the fly fishers concerned a serious thrill.

Small nymphs also accounted for a large number of fish as midge, olive and sedge activity remained high. As the month progressed it became apparent we are in for another massive fry feeding year, I have never seen so many course fish fry around lake margins. Looks like slim, patterns with a touch of sparkle will be in use during July!

While Mayfly hatches seemed to be more of a continuous trickle than an explosion this year, trout still seriously nailed them. Spinner falls during the first 2 weeks of June were superb, providing some of the best fly fishing. If anything, feeding was almost too good for the Coln fish, trout behaving very lethargically some days after feasting the previous evening. Other days sport was hectic, with 10-15 fish landed, dries and nymphs scoring well.

In Derbyshire the Wye has been low and very clear, producing what some people think of as very challenging conditions, we just think the sight fishing opportunity is awesome! Stalking the rainbow and brown trout with tiny nymphs and dries which included a few experimental patterns new for 2010 testing. Catches have been excellent with some very impressive individual fish too.

Lake fishing will be more demanding as water temperatures warm and food availability for trout reaches a peak. Prime times for any trout fishing will be earlier and later parts of the day. That said plenty of daytime opportunities exist for anglers willing to watch the water and experiment with sinking lines. Stalking trout is also highly productive, ensuring your fly is right in front of a trout’s mouth is the most effective way to increase your chances of a take. It’s also rather exciting!

River fishing will provide further superb stalking opportunities in clear water, with nymph and dry flies being effective according to conditions and time of day. Our river and lake fishing is all on spring fed waters, ensuring cool water for fish to remain healthy and active, making summer a very pleasant time to be waterside learning new skills.

Warm water fishing is really coming into it’s own now with carp activity high (we landed several nice fish during a few hours fishing in June) and pike action to top water lures offers some very exciting fly fishing. Carp really are a fantastic challenge on fly, a fact we were reminded of regularly as several carp examined our carefully cast nymphs, then when a take did come, wham, a blistering run resulted. Believe us, the tag of “freshwater bone fish” is a spot on description for these fish. We will be guiding for both pike and carp on fly throughout summer and autumn, providing you with the chance of big fish action during hot weather (hopefully anyway, we deserve a good summer).