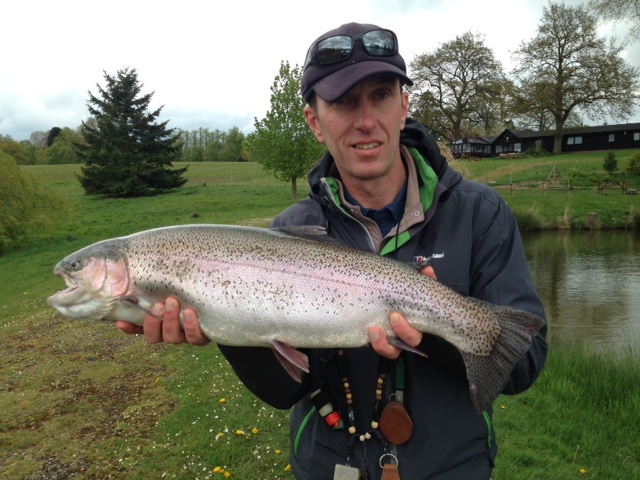 Two misconceptions about fly fishing are that winter time is closed season or winter fishing is for the few brave/stupid enough to venture out! This simply is not true. For both motivation, plus a few tips on winter fly fishing, checkout this video: –

Want To Know More? Read On!

Firstly, a large number of trout lakes in Great Britain remain open all year or operate an extended season. Second, trout love cold water, some of the very best stillwater fly fishing can be enjoyed from late autumn right through to early spring.

In addition to trout fishing, more and more anglers see fly fishing as a technique to effectively target other fish species. Pike, grayling and chub are great winter target species on many waters, that like trout, thrive in cooler water, provide great fly fishing and fight extremely well.

With the advent of modern outdoor clothing and recent mild winter weather, their is no need to be cold while enjoying outdoor life. In fact, their is no such thing as bad weather, just bad gear! To make winter fly fishing even more attractive, the fish are often in better condition and fight far harder in the cold, oxygen rich water than at more traditional seasons of the fly fishers year. Add to this that some of the largest trout, chub, pike and grayling are caught at this time and you can see (as shown in the pictures below) their is no reason to put those rods away!

Given that  trout thrive in cold, oxygen rich water environments, their is no better time to fish fish for them than winter. You won’t find lethargic fighting fish at this time of year, even 2lb fish will fight far more than their weight, so expect some real action! Many spring fed lakes will be crystal clear, often providing opportunities to sight fish. This is an extremely exciting way to fly fish, especially when you consider big trout to 20lbs plus will be active in some waters, providing the ultimate challenge in stalking trout.

Grayling apreciate cold, pure, water of our cleanest river reaches more than trout and are the ultimate indicator of a pristine environment. Despite being free rising especially the smaller fish, as they become older, wiser and larger, surface feeding deminishes and fish consume the majority of food from the river bed as suggested by it’s underslung mouth. Without doubt, casting weighted nymphs and bugs is the most productive way to target grayling and though most fish are likely to be less than 1lb, they fight very well on a light 4 weight outfit. A grayling of 2lbs is a big fish and anything around this size or above can be regarded as a very special catch. Check out our winter grayling fishing here!

For the angler looking for a target river species of consistently larger average size, the chub is in our opinion a fabulous sporting fish. While encounters during the summer months are sometimes sluggish in terms of the fight as the fish recover from spawning, a winter chub in top condition is another matter. Chub attain weights of 7lbs plus in UK waters, with many streams and rivers holding many 2-3lb fish. A good tip for big chub (fish of 4lbs plus) is to fish lies where you would expect a big brown trout to hold as they have very similar habits. Chub will tolerate less pure water than trout or grayling and thus are far more widely spread within river systems, readily accepting weighted nymphs and lures of the tadpole, wooly bugger and zonker styles.

Pike have a fearsome reputation which is undeserved. They are a perfect predator and have an awesome set of toothy hardware adorning their mouth which belies their fragility. Pike more than any other fish require very careful handling not as you might expect incase they bite you, rather to ensure you do not harm them. Pike are the ultimate big fish species for the winter fly fisher, with attainable weights of 50lb plus. However a big fish is considered 20lbs upward and is the target weight of many fly rodders now targeting them. Pike are widely available in both still and running water providing a real challenge and requiring heavier outfits than those used for the species discussed previously. An 8, 9 or even 10 weight outfit is required depending upon venue both to enable safe casting with big flies of up to 8 inches in length and to enable the angler to quickly land and return the pike without exhausting fish excessively. Please note when fly fishing for pike, your fly repressenting a bait fish species or an out and out attractor style MUST ALWAYS be attached to a wire tippet of at least 12 inches long. This is because pike will bite cleanly through monofilament nylons and flourocarbon.

For further details on our winter pike fishing, visit our pike on fly area.